The current sports betting promo code for William Hill is N40. New customers can bet £10 to get £40 in free bets via mobile (T&C's apply). Codes are also available for: sports, poker, games and bingo.

Follow an offer link for the full bonus description and T&Cs. Use the following link to view the casino codes.

18+. Play Safe. When you sign-up via Mobile using promo code N40 and place a bet of £10/€10 or more we will give you 4x £10/€10 free bets credited after settlement of first qualifying bet, free bets will expire 30 days after the qualifying bet is placed, payment method/player/country restrictions apply.

How To Use The William Hill Promo Code

Need further help or have any questions? Use the live chat or call William Hill on their UK freephone number 0800 0856 296. 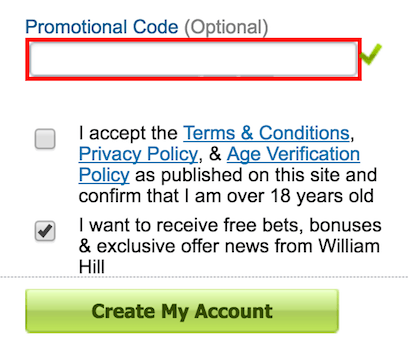 Available online and to new customers all you need to do is register a new account using the Promo Code C30. Then simply place your bet on any sports with a minimum deposit of £10/10€ with single/cumulative odds greater than 1/2 (1.5) and your free bets will immediately be credited to your account. Existing customers using 'duplicate' accounts will not qualify for the offer as it is limited to one new account per person, household address, debit card or IP number. The free bet stake is non-refundable, it is not included with any winnings, cannot be partially redeemed and does not count towards a qualification to view streamed events. Due to the abuse of these promotions, the only payment methods accepted for any free bet sign-up offer are debit cards, Cash Direct, bank transfer or cheque. Customers using any other online payment methods, including all forms of eWallet, to deposit funds will not qualify for any free bet sign-up offer. This William Hill promotion is only available to residents of the UK, Republic of Ireland, Canada, and the Netherlands.

The following are William Hill apps available from the iOS mobile app store. Promotional codes can be used within each app during registration.

What is a promo code and how do I use it?

William Hill regularly offers new customers the opportunity to earn a free bet or bets when they open an account and place a qualifying bet. You will find a promo code above which you will need to enter when you create your new account.

William Hill promo codes for new customers change regularly. Some of these are only valid for the duration of specific events while others may be valid for longer. Make sure you are able to fulfil the requirements of the promo code you have chosen before you sign up.

What types of Promo Codes do William Hill offer?

William Hill promo codes may offer many different sign up bonuses. Some of the most common ones you will find include:

How do I use my free bet?

After you've met any qualifying criteria, a free bet token will be credited to your account. Your free bet will be shown once you have added a valid selection to the bet slip and you simply need to use the drop down to select your free bet and then place your bet as normal.

What if I have problems using a promo code?

First check the eligibility criteria and expiry dates of the promo code you are using. If you meet all these criteria and still have problems claiming your bonus you can contact William Hill customer services by phone on 0800 0856 296 or live chat to help resolve your query.

William Hill offer many bonuses for existing players. They regularly offer bonuses and prizes to poker and casino players as well as promotions for sports bets, particularly horse racing.

Who can claim promo code offers?

Many promo codes are strictly reserved for New William Hill online customers. Only one account is allowed per household or per IP address.

William Hill named after its founder, a Birmingham boy born in 1903 came from humble beginnings, when a young William while working in a local factory started collecting illegal bets from the locals on his motorbike. Later in 1925, he progressed to working as an on-course 'bookie' but quickly lost his capital. Following this failure he moved to London in 1929 where he started work at the Greyhound track taking bets and going on to open an illegal gambling den in Jermyn Street in 1934. Exploiting a legal loophole William Hill produced the first fixed-odds football coupon in 1944. William died in 1977 a year after his retirement.

The first legal William Hill betting shop was opened in 1966 but changed hands many times before being acquired by Brent Walker in 1989. However the previous owners Grand Metropolitan had exaggerated its worth and it had to be being bought out by the Japanese Investment Bank Nomura in 1997, hot on the heels of an investigation by the Serious Fraud Office which saw two of its Directors receiving jail sentences.

From their beginnings as a bookmakers and turf accountants in the shops and on the race tracks of Great Britain William Hill now offers promotional codes and bonuses for: casino games, skill games, online bingo, and online poker. Hill, now boasts virtual betting and should you need it ACCA insurance. Their dedicated mobile site offers a range of betting options from horse racing to football and their online betting has a dizzying array of ways to place a wager. Should a punter wish to place an in-play bet their shops offer live streaming which is second to none.

William Hill has always been aware of the negative aspect of gambling and has sought to address this by launching a staff training programme to discourage underage gambling.

In 2002, William Hill acquired Sunderland Greyhound Stadium followed by Newcastle Greyhound Stadium in 2003. Shortly after in 2005 the company purchased 624 betting shops in the UK, Republic of Ireland, Isle of Man and Jersey from Stanley Leisure for £504 million: the acquisition took the company past Ladbrokes into first position in the UK betting market prior to the sale of 78 shops. In November 2008, William Hill went into partnership with Orbis (formally OpenBet), and the Israeli software company Playtech launching their business online. In the same year self-confessed ‘rascal’ and university drop-out Ralph Topping was appointed Chief Executive. Topping had worked his way up through the ranks having started as a ‘Saturday boy’ at a branch in Hampden Park, Glasgow in 1973.

In 2012, they became the first UK ‘bookie’ to break into the US market acquiring three chains in Nevada the only American State to allow fully-fledged gambling. Hill took control of Sportsbrooks, Lucky Leroy’s and Club Cal Neva giving the company control of 55 percent of the states Sportsbrooks locations. Further securing their place as a market leader.

William Hill operates on a worldwide basis its main offices are in the UK, Gibraltar, and Ireland, employing about 16,000 people. By offering betting by phone, mobile, internet or at one of its 2300 UK-wide betting shops betting at William Hill has never been more accessible. On Grand National day in 2007, Hill took over 125,000 bets from its call center in Rotherham, South Yorkshire and on an average day the betting shops process about 1 million betting slips.

Register and Claim Your £40 Bonus