Below is a list of bonus codes that have been confirmed valid and available for all Betfair products. T&Cs Apply. Follow each respective link for full details:

How To Use A Betfair Promo Code

Need further help or have any questions? Use the live chat by selecting Chat and choosing your topic from the drop down, or call Betfair on their UK number 0344 871 0000. 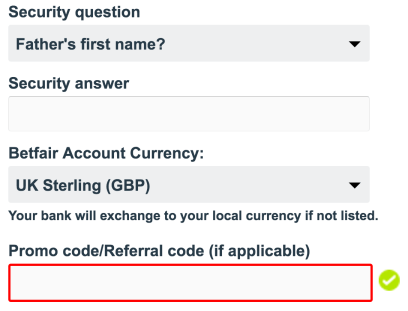 How to qualify for a Betfair product offer.

The bet £250 Get £100 extra offer is available to new Betfair customers. To qualify, you can open an account using the promo code ZBBC01. Place 5 bets of a minimum amount of £10 on any Sportsbook market with minimum odds of 1.5 (1/2) and Betfair will then give you a £10 in free bet within 24 hours of your qualifying bets being accepted. This process can be repeated up to 5 times. Your account must be registered in the UK or Ireland to be eligible. You must make your deposit using cards or ApplePay within 30 days of opening your account. You must use your free bet within 30 days on any bet on the Sportsbook (Fixed Odds) market at odds of at least 1.5 (1/2). You can split the free bet and use it at different times as long as you use it before it expires. Free bet stakes are not returned with winnings from your free bet. Read full terms here.

The following offers are available to new customers that download and install one of the mobile apps. The top offers change frequently and are usually only promoted in-app so be sure to check all areas prior to signing up.

How do I know if I've qualified for a bonus or free bet?

You can check if you have bonuses or free bets available to use by visiting the My Bonuses section on the Betfair website or app. This can be found on the website in the top left of the page, or by pressing on the cash balance display on the Sportsbook mobile app and visiting My Bonuses in the My Account list. This page will show you your available bonuses and free bets and their expiry dates, as well as details of any free bets or bonuses you have already used.

How do I use my Betfair Bonus?

Betfair Bonuses will automatically be used before funds in your main wallet as long as your bet meets the terms and conditions specified in the promotion. Just enter your stake as normal and if it is less than your bonus then any remaining amount will be left in your bonus balance. Bonuses can only be used for non-Exchange sports bets and bets placed with bonuses are not eligible for Cash Out.

How do I get my winnings from Betfair?

Betfair funds can only be withdrawn from your main wallet, so if you have funds in another wallet, such as your Poker account, you will need to transfer it back to your main wallet. Select the ‘Withdraw Funds’ option from your Account and select your payment method to withdraw your funds. Card withdrawals will take 2-5 working days to appear in your account.

How do I claim a Betfair Sportsbook Enhanced odds/price offer?

Betfair may offer enhanced odds or prices as an introductory offer to new customers. To claim one of these it will need to be the first bet you place with Betfair after registering your new account, on the correct market at the correct price. Follow the relevant link and you should see the enhanced odds price, place your bet, making sure you have checked the maximum stake for the offer, which is generally £10. If you see a different price from the advertised enhanced odds then contact Betfair customer services who will be able to direct you to right market before you place your bet.

Betfair launched in 2000. The brainchild of entrepreneurs Andrew Black and Edward Wray, it was the worlds first Internet betting exchange. Betting exchanges take a different approach to traditional betting sites by cutting out the bookmaker and allowing customers to bet directly against each other and Betfair was set to revolutionise the gambling industry. A fact they underlined with publicity stunts, such as parading through the streets of London carrying coffins proclaiming "The Death of the Bookmaker".

After being turned down for investment Black used his savings to launch the company, along with an investment of £1m from Black and Wrays family and friends. Although other online betting exchanges launched around the same time, Betfairs approach differed in operating more along the lines of a financial exchange. Instead of allowing only single bets it also allowed, among other things, multiple small bets to cover a position offered by someone who wished to place a large stake on a wager.

Despite stiff competition in the early years, Betfair dominated the market.  After acquiring their competitor Flutter.com in 2001, they soon owned more than 90% of the bet exchange market share.

Betfair claims to have over 4 million users and a turnover of over £50 million a week. It also claims that users can get an average of 20% better odds by betting on the site than by going through a traditional bookmaker. Betfair makes money by charging 2-5% commission on all winning bets placed through the site. Since 2008 they also levy premium charges on some customers if their total charges paid amount to less than 20% of their gross profits on the site, although Betfair estimate these charges affect less than 0.5% of customers.

Betfair's history is not without controversy. Their in-play betting system on horse racing drew concerns that broadcast delays of up to 5 seconds may allow companies using software that places high-speed automated bets to gain an advantage using courtside information that would not yet be available to regular customers. The bet exchange model has also attracted extensive criticism from traditional bookmakers who claim that it has increased gambling related corruption within sports. Betfair counter this claim by pointing out they keep personal records on all gamblers and have information sharing systems in place with a variety of sports bodies to ensure that suspicious betting patterns are fully investigated.

In October 2010 Betfair floated on the Stock Exchange with a share price of £13 that valued the company at around £1.4billion. In 2015 a merger between Paddy Power and Betfair was announced. The new entity Paddy Power Betfair maintains separate brands in the UK, Ireland and Italy.

Today Betfair offers not only an internet betting exchange, but a full range of online betting and gaming, including a live casino, online poker and bet exchange innovations such as Price Rush, where gamblers can get better odds if there are better offers on the exchange, and Cash Out, which allows customers to cut their losses by withdrawing part of their stake at any time.