Up To £10 Risk Free First Bet
Get Bonus & Visit Tote
Place your first £10 bet with Tote and if it loses you’ll get your money back in cash. UK customers only. 18+. Place your first bet on Pools and if it loses we’ll refund your stake in cash. Max refund is £10. Qualifying bet is the first bet added to the betslip. Totewin will be the qualifying bet when a Totewin and a Toteplace bet are struck at the same time. E-wallet deposit restrictions apply. Full T&Cs Apply.

Use the table of bonus codes to find the latest promotions that have been confirmed valid for use on the totesport.com website. T&Cs Apply:

UK customers only. 18+. Place your first bet on Pools and if it loses we’ll refund your stake in cash. Max refund is £10. Qualifying bet is the first bet added to the betslip. Totewin will be the qualifying bet when a Totewin and a Toteplace bet are struck at the same time. E-wallet deposit restrictions apply. Full T&Cs Apply.

How To Use A Totesport Promo Code

Need further help or have any questions? Use the free 24/7 live chat (click icon on the right), call Totesport on 0800 032 8188 or email customercare@totesport.com. 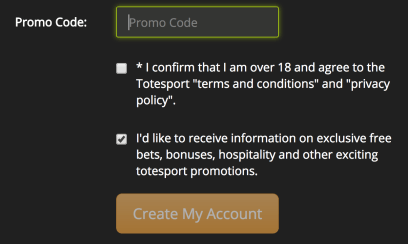 Get a Totesport Sports Bonus Today

Offers and Totesport codes can be changed or withdrawn at any time so it's always best to check direct with the operator before continuing. Follow the respective links to read the full terms and conditions for each promotion. T&Cs apply, 18+.

Get your stake refunded up to £10 if you are eliminated in the first race with Hong Kong Placepot Insurance.

Get get your money back up to £/€10 if your placepot bet loses in the first race.

Place a win bet with Tote and if the dividend is lower than the SP you will be paid at the SP price.

Get a 10% bonus with Tote Plus

Pick the winner of a selected race on Twitter and win a £50 free bet.

Open a new account on Totesport and place a bet of up to £10. If you lose your stake will be refunded as cash. Your first bet must be for a minimum of £1 to qualify for the offer. If your first bet is a Non-runner or declared void you will not receive a free bet. Your refund will be credited to your account within 24 hours of your first bet being settled. The refund can be withdrawn immediately. The offer is only valid for new UK and NI customers and is only available to one customer per household and IP address.

When considering signing up with a bookmaker you should consider the pros and cons. We've listed some of the Tote pro and cons below.

Totesport began as a statutory corporation in the UK in 1928 and became known as "The Tote" in 1961.

Tote bets differ from fixed-odds betting offered by traditional bookmakers. All the stakes placed are pooled together, and then a share is paid out to all winners after deductions are made to cover costs and contributions to horse racing. Totesport currently has a monopoly on this type of pool betting.

Privatisation of the Tote was first suggested by the Conservative Government in 1989 but met with strong opposition from the horse racing industry.

In 2006 the government planned to sell the Tote to a racing industry consortium for £150 million, but with a valuation of over £400 million the EU ruled that such a sale would be uncompetitive. The consortium failed to raise the necessary funds, and a bid by Gala Coral for £405 million was rejected by the Government.

In 2008 the Government finally announced that the Tote would be for sale on the open market. The deal was finally settled in June 2011. The successful bidder was Betfred with a bid of £265 million. The sale included a seven-year license to operate pool betting at UK race courses and Betfred committed to pay £70 million to horse racing over the same period.

In 2015 Totesport launched a new website and a mobile app which allowed betting across the full sportsbook. True to its origins Totesport is still a major sponsor of Horse racing in the UK.