The current Betfred promo code is SPORTS60 and new customers must deposit at least £10 following registration to claim their bonus. A code is required when joining to activate the offers for: sport, casino and bingo.

Below is a list of valid codes available for January 2021. These offers are available only to individuals 18+. T&Cs Apply. Please gamble responsibly. Gambleaware.

Betfred Vegas Terms - Stake £5 Get Up To 25 Free Spins

New customers only. 4th - 14th November 2020. Min stake £1. Enhanced Odds of 800/1 on Irish Lotto straight-line treble bets of £1 or more which do not include the bonus ball. Enhanced winnings credited in cash within 24-hours of bet settlement. Max £500 per player, per draw day. Register using promo code LOTTO. Deposit and stake £5 on Lotto or Numbers draws and settled within 14 days of registration for £15 in Free Bets. First bet must be placed on Lotto or Numbers draws. Free Bets credited within 24 hours. Free Bet amount is not included in any return and expire after 7 days. Payment restrictions apply. SMS validation may be required. Full T&Cs apply.

How To Use A Betfred Promo Code

Need further help or have any questions? Use the live chat by clicking Live Help on the left hand side of the page, call Betfred on their UK freephone number 0800 028 7747 or email support@betfred.com. 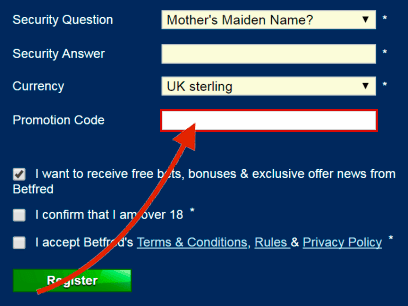 Where to enter the Betfred promotion code.

You must register and deposit using a debit card. A £10 sports bet must be placed at evens and the bet must be settled within 60 days. A £30 free bet and 30 free spins will be credited within 48 hours of the first bet being settled. The free bet will expire after 7 days if unused. Non-runners, void or cashed out bets will not count as qualifying bets. The casino bonus must be rolled over 50 times before any winnings can be withdrawn. Not all casino games have 100% of bets placed count towards the wagering requirements, follow the term link for full details. Only one offer allowed per household or IP address. Read full terms here.

Most Betfred welcome promotions are also available when the product is accessed via an app instead of the usual desktop or mobile browser. Players can sign up in-app, enter promo codes and makes deposits to activate bonuses as usual. Direct links to each mobile app are provided below:

Who can use Betfred Promo Codes?

Any new customer living in the UK and Northern Ireland over 18 years of age can use Betfred promo codes. Some codes may have specific restrictions or wagering requirements or other significant conditions that will be made clear in the terms.

Can I use a promo code if I am an existing customer?

Most promo codes are for new customers, but from time to time Betfred may automatically offer you free bets, bonuses and exclusive offers. These are known as Automatic Promotions and will be provided to you via in-game messages or messages to Your Account.

What if I have problems using a promo code?

First check the eligibility criteria and expiry dates of the promo code you are using. If you meet all these criteria and still have problems claiming your bonus you can contact Betfred customer services by calling 0800 028 7747 or email support@betfred.co.uk. Betfred also offer a Live Chat function that can solve your query quickly.

What if I don’t want to use my bonus funds?

If, after accepting a bonus offer, you decide you don’t want to use the funds then you can contact the Betfred Customer Services team by calling 0800 028 7747 or email support@betfred.co.ukor using live chat. It is important to do this before you place any bets or play any games with the bonus active. Once you have placed a bet or played a game you have accepted the promotion and it cannot be removed from your account.

How long do I have to use my bonus?

Betfred bonus funds and free spins expire in 7 days and will be removed from your account. Always check the significant conditions for any variations if you are unsure.

Brothers Fred and Peter Done opened their first high street betting shop in Salford in 1967. Using their insight from their father's bookmaking efforts - along with a hefty win from a successful wager on England's 1966 World Cup victory - they established a comfortable and reputable business with an emphasis on customer service which soon required further premises.

During the 80's Fred Done established the 'Lucky 15' bet - giving punters the chance to win a large payout from a small stake by spreading bets across several fixtures and accumulating the win. The company cemented its USP by positioning itself as the 'Bonus King', offering more daily promotions and bonus boosts than any competitor. This propelled Betfred's success, and by the late 1990s the company had increased its high-street presence to 100 shops, rising again over the next decade to over 500 shops, one of which created the first betting shop millionaire in 2004.

In 2011, Betfred won the auction to buy Totesport for £265m, making the group the country's fourth-largest high street bookmakers and largest Racing sponsor, sponsoring 700 races per year between 2011 and 2018. The purchase represented a commitment from Betfred to raise the profile of the Racing industry by increasing investment and commercialisation, along with a focus on charitable and social responsibility. The Tote acquisition has helped to render Betfred a dominant player in the bookmaking industry, with high profile partnerships (Manchester United, Wembley Stadium) and exclusive sponsorship deals across a number of sports, such as the Cheltenham Gold Cup and the World Snooker Championships.

Furthermore, Betfred's online presence has grown rapidly to become the fastest growing eGaming business in the UK. Alongside the vast array of digital offerings available at Betfred.com, the company has developed an award winning innovative mobile platform, with betting opportunities in over 200 web games and mobile apps for products such as Goals Galore, Lotto and Virtual Racing.

In 1998 Betfred was forced to accept a reputed loss of £500,000 when they became the first bookkeepers ever to pay out on a fixture early - namely on Manchester United winning the Premier League title, which went to Arsenal. A similar early payout cost the company dearly in 2012 when Manchester City finally beat Manchester United to the title on goal difference. However, such historic losses have failed to slow down the massive growth of Betfred, who operate from its headquarters in Warrington. It continues to place customer service at the forefront of its offering, with dedicated training for its 10,000 staff across the UK (including award-winning shop managers), along with practical efforts such as its in-house TV channel and the latest technology showing all fixtures available in all its licensed premises. Co-founder Fred Done's dedication to investment in the high street is reflected in the ongoing acquisition of premises, such as the recent purchase of over 300 shops from Ladbroke/Coral, bringing the estate total to over 1,300 licensed offices. Betfred's annual turnover currently rests at an eye-watering £8bn and, as it remains privately owned, renders Betfred the world's largest independent bookmaker.