£20 Risk Free First Bet + Paddy's Reward Club
Bet Now
New customers only, limited to one per person. If you’ve previously had a Paddy Power account, you will not qualify for the offer. Place your first bet on any Sportsbook market and if it loses we will refund your stake in CASH. Max refund for this offer is £/€20. Only deposits made using Cards or Paypal will qualify for this promotion. T&Cs apply.

Below is a list of valid promo codes available for Paddy Power products in July 2020. These offers are available only to new customers who are 18+ in age. T&Cs Apply. Please gamble responsibly Gambleaware:

Promo code YSKA00. Place your FIRST sports bet and if it loses we will refund your stake in cash, up to £/€10. T&Cs apply.

New customers only, limited to one per person. If you’ve previously had a Paddy Power account, you will not qualify for the offer. Place your FIRST bet on any Sportsbook market and if it loses we will refund your stake in CASH. Max refund for this offer is £20. Only deposits made using Cards or Paypal will qualify for this promotion. T&Cs apply. Paddy's Rewards Club: Get a £10 free bet when you place 5x bets of £10+. T&Cs apply.

New Customers from UK & IRL only. Deposits made with e-wallets are not valid for this promo. Bonus wagering x35 on eligible games. Winnings from bonus capped at £500. Spins available after bonus is redeemed/lost. Opt in required. Full T&Cs apply.

New Paddy Power Poker customers only. Deposit and Spend £20 and get £50 in bonuses. Bonus is released in increments of £10 over customers first 5 days. £20 must be spent on tournaments, twister and SitNGos only to receive bonus. Full T&Cs apply.

New Customer Offer only. Deposit and spend €10 on bingo tickets within 30 days of joining Paddy Power Bingo. Get €30 paid as Bingo Bonus (x1 wagering requirement), €10 as Slots Bonus (x20 wagering requirement) & 40 Free Spins ( €0.10/spin) on Mystery Reels Megaways slot game. 1 per customer. Your age and mobile number must be verified before you can avail of this offer. Full T&Cs apply.

How To Use a Paddy Power Promo Code

Need further help or have any questions? Either Message Paddy Power, call their UK freephone number 0800 056 5275 or tweet @askpaddypower. 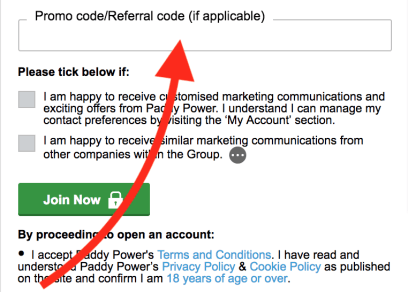 Register a new account using the promo code YSKA46 and deposit at least £10 using a debit card or PayPal. All other deposit methods are ineligible for this offer. A £10 sports bet must be placed at odds of at least 1.5 (1/2) within 30 days. Place a sports bet and if the wager is settled as a loser, Paddy Power will refund your stake in cash. The refund will be processed within 1 hour of the bet being settled. Check the full terms Only one offer allowed per household or IP address. Read full terms here.

The following are Paddy Power apps available from the iOS mobile app store. Promo codes can be used within each app during registration.

What is a Paddy Power Money Back Special?
Paddy Power declares itself the king of the money-back special. These promotional offers are frequently available on specific sports or events and are normally valid to the start of an event with a maximum refund of £50 per customer/bet. Place your bet as usual and if it loses then Paddy Power will refund your stake as a free bet, up to the maximum amount specified.
How long until I get my winnings from Paddy Power?
You can withdraw funds from your Paddy Power main balance to a debit or credit card or bank account. Withdrawals take a minimum of 2-3 working days to reach your account but can take up to 5 working days due to bank processing times. Some Visa cards are eligible for instant withdrawals.
If your funds still have not arrived after 5 working days then contact Customers Services and a trace can be placed on the transaction.
Can I cash out a free bet?
Free bets can be cashed out, but only when the value of your cash out is higher than the value of your free bet. Free bet stakes will not be returned to you.
How do I place a free bet?
Before you use a free bet you should check what market and bet value you need to make. On the website this can be found by clicking view details on the Promotion Balances page and then clicking View Bonus/T&Cs to view the terms for that offer. On the Mobile app it can be found in the My Free Bets section under My Account.
You can then place your eligible bet as normal and just ensure that the Use available bonus toggle is selected on the betslip.

The Power brand was considered strongest at the time, so the name was maintained. The addition of “Paddy”, along with its distinctive green branding, was designed to emphasize the company’s Irish roots at a time when many UK bookmakers were making inroads into Ireland due to changes in the Irish tax code.

Paddy Power pursued an aggressive expansion strategy from the start. Opening shops in prominent locations in Irish towns to maximise its visibility. Its share of the Irish off course betting market grew from 8% in 1988 to 33% in 2001.

By 2000 Paddy Power were successful in Ireland, but they continued to expand further. Paddy Powers parent company, Power Leisure, floated on the stock exchange to fund further expansion into the UK, and they purchased PaddyPower.com to expand into the global online bookmaking market.

In 2015 a merger between Paddy Power and British company Betfair was agreed which saw Paddy Power acquiring the Betfair brand. The resulting entity, Paddy Power Betfair, is based in Dublin.

Paddy Power have acquired a reputation for controversy which has gained them a lot of publicity. They have offered odds on controversial markets, such as the outcome of the Oscar Pistorius trial, which attracted so many complaints that the company was forced to cancel the bet. Other controversial markets have included bets on the first species to be driven to extinction by the BP Oil spill in the Gulf of Mexico, the potential extinction of the Polar Bear and whether Barack Obama would finish his term as President of the United States.

Their advertising campaigns have also attracted controversy. In 2010 an ad showing sight-impaired footballers kicking a cat received more than 400 complaints to the ASA. In 2012 Paddy Power released an advertising campaign encouraging customers to distinguish "the stallions from the mares" by placing transgender women in the crowds at the Cheltenham Festival. The ad was subsequently ruled offensive and banned by the ASA.

In October 2018, Paddy Power Betfair received a £2.2m fine from the UK Gambling Commission, after an investigation revealed that the gaming giant broke the commission's rules regarding social responsibility and anti-money laundering.

In December 2018, Paddy Power and William Hill faced further criticism after allegations that they allowed a gambling addict to wager thousands of pounds in stolen cash.

Paddy Power were the first betting company to launch their own iPhone app in 2010 and for some time were the only bookmaker in the world available on the app store with mobile betting being the biggest growth area for the company. The company is now valued at over £6bn with over 600 shops in the UK as of 2017 and boats one of the biggest e-commerce businesses in the betting and gaming sector.

Register and Claim Your Bonus