Use the list of valid bonus codes below on Sky Casino, Vegas and Game products. T&Cs Apply:

How To Use A Sky Casino Promo Code

Should you have any further questions please use the Sky Casino live chat (fill in details) or send an email (2-5 working days response time). 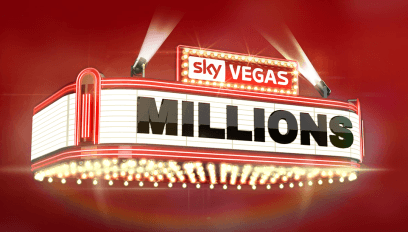 Register For Your Sky Casino Bonus

Create a new account at SkyVegas.com and 50 free spins will be credited to your account. Your free spins can be used for 7 days from the date of registration. The bonus must be wagered 40 times before any winnings can be withdrawn from your account. Make a first deposit of £10 or more to your skyvegas.com account and click the “opt in” button and an additional £40 will be credited. The first deposit bonus is valid for 30 days. Wagering requirements for the first deposit bonus are 40 times the sum of the first deposit and bonus and these must be met within 30 days before any winnings can be withdrawn from your account. The new account bonus and first deposit bonus can be used on all games on SkyVegas.com except Super Monopoly Money. Slot Games and Instant Win contribute 100% towards wagering requirements, on Table and Card Games only 20% of the amount wagered will contribute towards requirements. Read full terms here.

Why Choose The Sky Vegas Casino?

Sky Vegas is one of the core brands of the Sky Betting & Gaming company. Since March 2015 the company has primarily been owned by CVC Capital Partners Limited when an £800 million deal was finalised. Sky Plc retain 20% ownership of the company and agreed long term licensing of the Sky brand. They are licensed by the Alderney Gambling Control Commission and the UK Gambling Commission.

Following the 2005 UK Gambling Act a Sky Vegas digital television channel was launched that offered interactive betting on virtual horse and greyhound racing. The channel existed until April 2011 when it was moved under the Sky Bet brand.

Sky Vegas has been the subject of some high-profile jackpot wins. In 2011 David Robson, a Civil Servant from Newcastle upon Tyne, bet 90p on Sky Vegas Millionaire's Club slot machine and landed a jackpot of £2.6 million. More recently in 2016 a similar story appeared when builder Scott Clydesdale won a jackpot of £1.6 million using a £20 bonus voucher on the Toy Story slot machine on the site.

More controversially Sky Vegas also hit the news in 2016 when the Advertising Standards Authority upheld a complaint about one of their TV adverts. The banned advert featured a character called Michael who was transformed into "Rockstar Michael" when gambling in the Sky Vegas Casino. The ASA banned the ad finding that it suggested "...gambling would enhance the personal qualities of those gambling."

Sky Vegas now offers over 130 games including roulette, blackjack, table games and slots. It also features a Live Casino where players can interact with live dealers at tables offering blackjack, roulette, casino hold'em, baccarat and HiLo. Unlike many of its competitors Sky Vegas does not offer downloadable software, instead all of its games are offered directly in a players browser using flash. The website is also available in a mobile friendly format, or via the Sky Vegas mobile app which is available on iOS and Android.