£30 in Free Bets and Spins
Get Bonus & Visit Netbet
New Customers Only. £15 in Free Bets and £15 in Free Spins for Casino and Vegas. Minimum £30 Single Bet to Qualify.Free Bets are valid for 3 days each. One Welcome Offer will be applied per customer, per household, per IP Address. Further T&Cs Apply.

An up-to-date list of the most recent codes available across NetBet products and websites. T&Cs Apply:

New Customers Only. £15 in Free Bets and £15 in Free Spins for Casino and Vegas. Minimum £30 Single Bet to Qualify.Free Bets are valid for 3 days each. One Welcome Offer will be applied per customer, per household, per IP Address. Further T&Cs Apply.

How To Use A Netbet Bonus Code

Need further help or have any questions? Use the free live chat, call Netbet on 0203 740 3716 or email them using the contact form. 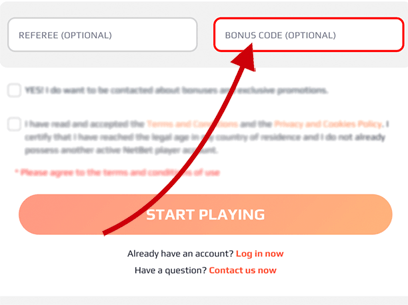 How to enter a NetBet Bonus Code

Offers and NetBet codes can be changed or withdrawn at any time so it's always best to check direct with the operator before continuing. Follow the respective links to read the full terms and conditions for each promotion. T&Cs apply, 18+.

Get your stake back as a Free Bet up to £10 if your team scores the first goal then loses during Euro 2020.

Get up to £25 in free games with the Live Tables Championship, plus collect Football Special Cards on Blackjack tables and get £1,000 cash.

Play selected games during Euro 2020 to earn tickets to one of 3 prize draws.

To claim this offer register on NetBet and deposit and place a £30 single/combo bet at minimum odds of 1/2. Receive £30 in Free Bets and Free Spins when your bet settles. Free Bets will be credited to the account within 24 hours of the qualifying bet settling 50 Casino spins and 25 Vegas spins will be credited instantly. Free Bets are valid for 3 days each. Maximum of three x5FB will be applied per account. Free Bet stake is not included in any winnings. Casino & Vegas Free Spins will remain valid for 30 days after the issuing date. Casino free spins wagered 40 times (Playthrough x40). Vegas free spins must be wagered 50 times (Playthrough x50) with 100% contribution only on the slots.

When considering signing up with a bookmaker you should consider the pros and cons. We've listed some of the NetBet pro and cons below.

NetBet was founded in 2001 and is one of the most complete gaming groups in the regulated market across Europe with offices in the UK, Malta, and Romania. The site is offered in English, German, Japanese, Spanish, Italian, French, Greek, Romanian, Portuguese and Finnish.

NetBet has held a European licence from Malta since 2006 and is licenced by the UK Gambling Commission. It also holds licenses in Ireland and Greece. Online casinos in Italy and France also run under the name and brand of NetBet Enterprises. NetBet were the first gambling operator to be approved in Romania in 2015.

NetBet features a games portfolio with thousands of titles from industry-leading providers, including NetEnt and Microgaming. In 2016, they signed a six -year contract with gaming provider, Playtech, in a deal that included exclusive Playtech content.

In 2018, Iron Dog Studio released its entire suite of games with NetBet Casino in an integration facilitated by NetBet’s provider, iSoftBet. NetBet were the first online sportsbook and casino licensed by the UK Gambling Commission to accept Bitcoin as a payment method with the provider, Bitpay in 2016.