Search the table below for the best bonuses currently available at sportingbet.com across all products. T&Cs Apply to all offers:

How To Use A Sportingbet Promo Code 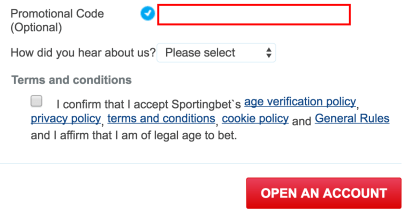 Open a new account at Sportingbet and deposit £10 or more. If your first lose loses you will be awarded a free bet to the value of your stake up to £10. The free bet can be used and any winnings are immediately withdrawable. Note that the free bet stake is excluded from the returns. The offer is valid on one new account per household and cannot be claimed by customers who have previously held accounts with Sportingbet that are now closed. To access this offer you must be located in the United Kingdom or the Republic of Ireland. Read full terms here.

Sportingbet was launched in 1998 by Mark Blandford and Geoffrey Wilkinson with an investment of £200,000. Before founding Sportingbet Mark Blandford was a traditional bookmaker, owning a bricks and mortar book making business for over 15 years. In the mid 90s he was one of the first to spot the potential of the internet in the online gambling business and in 1997 he sold his chain to Tote Bookmakers to launch Sportingbet the following year.

In 2001 Sportingbet floated on the London Stock Exchange Alternative Investment Market (AIM). Following its flotation the next few years saw rapid growth for Sportingbet. In the first 3 years they saw sales shoot up from £600,000 to over £300 million. Its founder Mark Blandford was voted AIM Entrepreneur of the Year in 2002 and the company earned AIM Transaction of the Year in 2005.

In 2004 Sportingbet acquired Paradise Poker for $340 million and 2 years after the purchase profits from the site had increased to over $150 million.

In 2006 Sportingbet became embroiled in controversy after its British Chairman Peter Dicks was arrested at JFK Airport in New York. Dicks was in the US on business unrelated to gambling. He was arrested under an outstanding Louisiana warrant. Louisiana is one of a few US states that have recent laws that explicitly prohibit online gaming. Mr Dicks was granted bail of $50,000 and shortly after tendered his resignation as chairman of Sportingbet. Following this controversy Sportingbet sold all of its US-facing sports betting and casino businesses to a group of private investors for $1. They retained the Paradise Poker brand name, but migrated all users to a new Sportingbet poker platform and stopped taking deposits from all US customers.

In 2009 Sportingbet became shirt sponsors of Wolverhampton Wanderers in a deal that lasted through to the end of the 2012/13 season. In 2010 they also became the official gaming partners of Tottenham Hotspur and Leeds United which saw Sportingbet operating in the clubs stadia as well as online.

In 2010 Sportingbet moved up to the main market on the London Stock Exchange. A takeover by William Hill and partner GVC Holdings was announced in October 2012 for £530 million. As part of the deal William Hill acquired Sportingbets assets in Australia and Spain.

Sportingbet offers sports betting on over 31 sports covering over 26 countries. Football betting is their most popular product and they offer betting on over 500 football leagues worldwide with over two thirds of revenue coming from in-play betting. They operate several websites. The largest are wholly owned by Sportingbet, but they also offer a service similar to a franchise in which independent operators can license the Sportingbet centralised software, trading and customer services and receive a portion of the profits their customers generate.