An up-to-date list of the latest ladbrokes promo codes available across all products and categories. Use the following link for a full list of casino codes. T&Cs Apply:

How To Use The 20FREE Promo Code

Need further help or have any questions? Use the live chat (must be logged in) or call Ladbrokes on their UK freephone number 0800 731 6191. 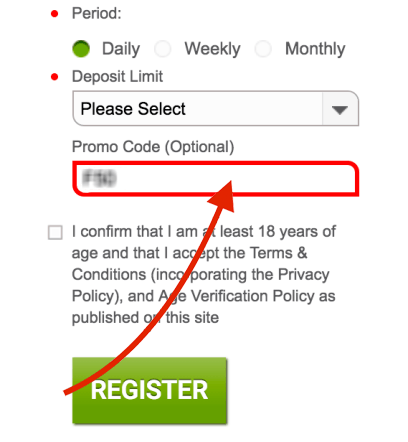 The Ladbrokes free bet offer code gives you the opportunity to cash in up to £20. The promotion is only open to new online and mobile customers and is not available via telephone betting or in Ladbrokes shops. Just register your new account deposit a minimum amount of £5, making sure you enter the correct promo code 20FREE then place a single bet of £5 or more on any sport and 4 £5 free bets will become available. To qualify for each Free Bet the first bet must be placed on odds over 1/2. The qualifying bet must total £5 or more and be placed on any sport and only the win parts of each-way bets qualify. Tote or pools bets do not qualify for the promotion. The free bet will appear in your account when the qualifying bet has been placed and must be redeemed online, on a mobile or a tablet. Be sure to redeem the offer within 4 days or else it will expire. All Free Bets are non-refundable and the Free Bet stake is not included in any returns. You must be 18 or over to participate in this promotion. These terms and conditions are in addition to Ladbrokes general special offer Terms and Conditions.

Below are sporting events available at Ladbrokes, where you can place your initial bet after signing up and making a deposit. Horse races and football matches are the most popular options for placing a free bet.

Below are direct links to the most popular Ladbrokes apps and their respective promotions that can be accessed after installation. Note a code from the table above to active your chosen offer when registering.

iOS - This app boasts a stylish, slick design with quick and easy navigation. There is betting on more than one sports book, an extensive choice of markets, including a wide range of sports, casino, Vegas games, bingo and slot. You can use the £20 Ladbrokes bonus code in a matter of seconds using the app’s rapid touch screen menus, which is perfect for in-play gaming. There are multiple payment methods for making your deposit. The iOS app has great odds and live streaming of scores to keep you up-to-date, making this an exciting way to have a wager. The my ACCAS option updates live and in-play accumulators which is great news for 'footie' fans

Android - Offers a good straightforward design, its simplicity makes for quick navigation and ease of use. There are a range of payment options available and signing up is easy. Place and claim your free £20 promo code and continue to enjoy Ladbrokes PROMOS with their weekly updates. The app offers a wide range of options with great access to the markets, all sports, casino, bingo and poker. The odds are super and a list of the most popular current bets are displayed on the home screen to keep you in the loop. There is a vast choice of online money games, ideal if you fancy placing a cheeky bet. However, if you want to use the new Vegas app, you will need to access their web app available at www.ladbrokes.com/vegas and download it to your device.

Windows - Provides a clean, simple but stylish design, offering quick navigation. This is a sweet little app offering features such as a personalised homepage where you can check your status and your bets, automatic login, virtual betting slips your own score board and best of all the snappy ‘Quick Bet’ which allows you to place your bet in seconds. Not only can you claim your £20 code with this app you can also lay claim to a variety of football coupons as an added bonus. The gameplay is good offering a great selection of sports together with casino, bingo and poker. If you don’t already have an account with Ladbrokes don’t worry you can register through the app on your mobile and take advantage of the welcome offer. Claiming and placing bets is ‘safe as houses’ with Paypal secure payment support. If you are out and about with little time to spare this is the app for you. 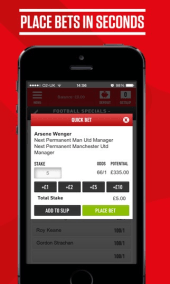 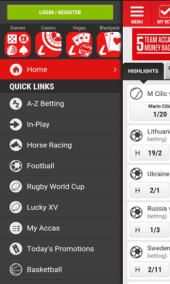 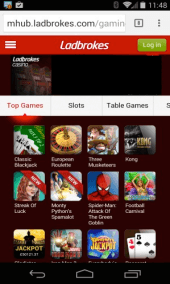 Can I withdraw my New Customer Offer winnings?

Ladbrokes New Customer Offer winning are paid as free bets. This means that if you sign up through one of their special offers are your bet is a winner, you will only be able to withdraw your initial stake, the remainder of your winnings will be paid as free bet tokens. Any winnings from these free bets will be withdrawable as cash.

How long does it take to receive my winnings from Ladbrokes?

The length of time it will take to receive your winnings once withdrawn depends on the method you use to withdraw. Grid payments are instant, payments by Paypal, Skrill or Neteller will be with you within 3 hours and payments by Worldpay, Debit or Credit Card of Bank Transfer can take 1-2 working days, but may take up to 5 working days in some circumstances.

How long will it take for my bet to be settled?

Bets are settled as soon as the result is known, this can vary by event and during busy times, such as Saturday afternoons between 4.45pm and 5.15pm hen hundreds of markets are being settled at the same time.
If your bet is still not settled more than 2 hours after the result is known then you should contact Ladbrokes Customer Support by visiting the help centre.

What details do I need to provide to open an account with Ladbrokes?

To open a new account with Ladbrokes you will need to provide your personal details, including your name, date of birth and email address as well as your address and phone number. You will also need to set a username and account number.
All customer accounts need to be verified, and in some cases Ladbrokes may ask you to provide additional documentation to verify your identity such as a valid passport of driving license. The full list of acceptable documents can be found on the Ladbrokes website. 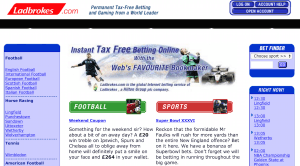 2002 Ladbrokes homepage with no promotions.

Ladbrokes came into being in 1886 when commissioning agents Messrs Swind and Pennington started the company on behalf of Ladbroke Hall in Worcestershire. Always the 'bookies' of choice for the upper classes the operation moved to London’s West End and then onto Mayfair in 1902 under the guidance of Arthur Bendir who coined the name Ladbrokes. Surprisingly the early driving force behind the company was a woman a Mrs. Helen Vernet who joined at the request of Arthur Bendir in 1919, later becoming a partner in 1928. Mrs. Vernet stayed at the helm until 1956 when at the age of 80 she died. At, this time, the clientele was drawn from the aristocracy and elite gentleman’s clubs based in the St James’ area of London. However, the second World War had taken its toll this and an unwillingness to adapt lead to the sale of Ladbrokes to Mark Stein who passed it on to his nephew Cyril.

With the advent of the ‘Betting and Gaming’ act in 1961, Stein was able to establish a chain of betting shops however, disaster struck in 1963 when football results cost the company 1 million.

In 1972, Ladbrokes moved into international property development with the acquisition of the London and Leeds Development Corporation making them one of the biggest hotel operators. The empire extended in 1984 with the purchase of 400 betting shops in Belgium from Le Tiercé SA and the Detroit Race Track in the US. Soon to follow was the purchase of Hilton International and Texas Homecare securing its place as a force within the marketplace. The end of the 80’s saw the Ladbrokes take over of the football pools company Vernon. At this time due to changes in the law Ladbrokes betting shops were improved with customer comfort in mind serving light refreshments and offering live coverage of events. At the end of the decade, Ladbrokes saw record profits of more than £300 million which marked 20 years of unbroken profit growth. With the advent of the 90’s Ladbrokes momentum showed no signs of slowing down with the opening in Birmingham of the biggest betting shop in Europe.

The company continued to evolve and when in 2005 the UK gambling laws were further relaxed Ladbrokes launched a TV Ad campaign using ex-professional footballers. A string of complaints followed before it was finally passed by the Advertising Standards Agency. Vernons was sold this year for a whopping £47million. In 2007, operations were extended to Spain partnering with LBA and later CISA which saw the launch of the online gaming site ‘Sportium’. In 2009, the company shed 263 jobs when the call centre at Aintree was closed due to offshore competition and falling profits. In 2013, the company moved into the Australian market. As of 2015 Ladbrokes brokered a deal to merge with Gala Coral making it the UK’s biggest book Makers with 4,000 betting shops and 30,000 employees.

Despite teething problems the company now boasts a strong digital presence and has business interests in UK and European retail. Customers can access gaming wherever they are it at the track, at home via the telephone, while out and about on a mobile device using their many apps, for iOS, Windows, or Android and online. Ladbrokes shops offer live streaming of events and in-play betting not to mention virtual sports covering all the main sporting areas. They have a wide selection of online and mobile games designed to attract all types of customer such as Slot, Keno, and scratch cards and for those looking for bigger stakes, there is a special telephone service for the high rollers.

To activate the code a deposit must be made, these are free of charge and have a maximum deposit limit of £99999.

Join and Make Your First Deposit

To withdraw any free bet winnings all deposit methods are also available as free of charge withdrawal options with the exception of Western Union.

The processing time for each method varies greatly and they are as follows: 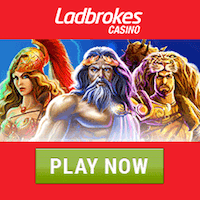 The following poker offer is automatically applied to each new customer account without the need to enter a specific promo code. Should any new promotion begin that requires a code, it will be promptly added to this section. 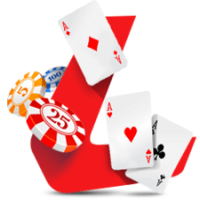 Get Your Poker Bonus

To get this bonus the promo code box must be left empty when joining otherwise a different offer will activate instead for either: sport, casino or poker depending on the code used. 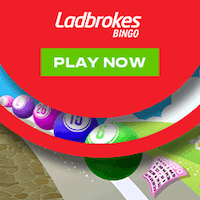 Get Your Bingo Bonus