Below is a list of bonus codes that have been checked and confirmed valid for all Gala offerings. T&Cs Apply:

How To Use A Gala Casino Bonus Code

In need of further help? Use the 24/7 live chat (follow the options) or call Gala Casino on their UK freephone number 0800 3284272 or email help@galacasino.com. 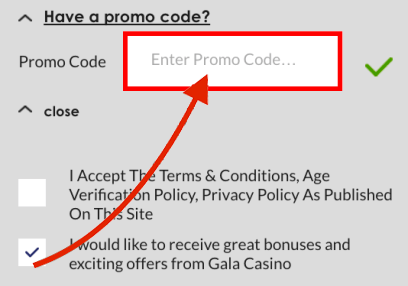 Where to enter the Gala Casino promo code.

Get Your Gala Casino Offer

Offers and Gala Casino codes can be changed or withdrawn at any time so it's always best to check direct with the operator before continuing. Follow the respective links to read the full terms and conditions for each promotion. T&Cs apply, 18+.

Deposit and stake a minimum of £20 in one single deposit on any games within a period of 7 days from the deposit being made. Deposits made via Paypal, Moneybookers, Paysafe, Skrill or via any pre-payment card will NOT qualify. You will need to claim/activate your Welcome Bonus under the PROMOTIONS section. The Welcome Bonus must be accepted by you within 7 days and used within 7 days of becoming available or it may be forfeited. The Bonus is subject to 35x wagering requirement. The Wagering Requirements for this Welcome Bonus must be met within 7 days following the date on which your Welcome Bonus becomes active otherwise any funds sitting in your Bonus Balance wallet and/or Pending Winnings wallet will be forfeited. Free Spins are only valid on Big Banker Fun Drops, Mighty Atlantis, Cake Off. Any winnings from the Free Spins will be subject to 10x wagering requirement.

Should I Join Gala Casino?

When considering signing up with a Casino you should consider the pros and cons. We've listed some of the Gala pro and cons below.

Gala Casinos began as Gala Bingo in 1991. Bass purchased Granada Theatre Limited's bingo clubs to merge with their existing Coral social clubs and in October 1991 17 clubs were re-branded under the Gala name. In December 2000 they diversified outside Bingo with the purchase of 26 Ladbroke Casinos from the Hilton Group for £235 million.

In 2001 they moved into online gaming and purchased Jamba from Carlton. Jamba was a free to play games site, but with significant investment Gala transformed it into fixed odds betting and an online casino. In 2004 the Gala company was bought out by private equity investors Candover and Cinven. In 2005 the private equity firm Permira also bought a stake, valuing the company at £1.89 billion. Just 2 months later, in October 2005, Gala merged with Coral Eurobet in a deal worth £2.15 billion.

In 2006 it purchased Gala were the owners of 31 Casinos. In 2012 the Rank Group purchased 23 casinos from Gala Coral. This left Gala operating just 3 offline Casinos, in Gibraltar, Dundee, and a further license to operate a club in central London.

Since 2015 Gala is part of the Ladbrokes Coral group, following a merger of Gala Coral with Ladbrokes.

Gala now run an online Casino offering over 300 games including roulette, live dealer blackjack and poker. They also provide an app for iPhone, Blackberry and Android phones that offer some of their most popular games in mobile format.